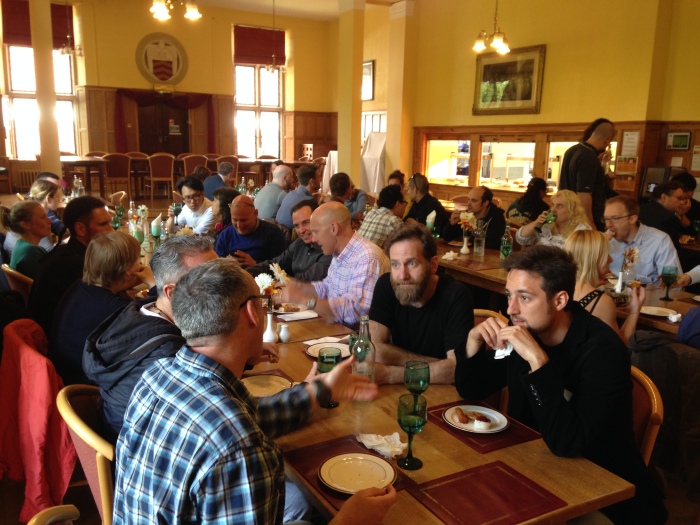 This is just a quick email to inform you of some Martial Arts Studies matters that may interest you.

The first point to make is that we now have a final(ish) list of confirmed speakers for the Martial Arts Studies Conference that will take place over 19-21 July at Cardiff University. Registration is here. Once you have registered, you will receive instructions about how to book good quality but affordable University accommodation.

A second thing I wanted to draw your attention to is the fast-approaching Martial Arts Research Network Event, Kung Fury: Contemporary Debates in Martial Arts Cinema, which takes place on 1st April in Birmingham City University. Registration is free, but it is essential that you register in order to gain admittance. It also helps us calculate the level of catering to provide. (The Eventbrite site lists some of the confirmed speakers  I’ll be adding the names of one or two other academic speakers, plus confirmed speakers from the film industry, ASAP.)

For future research network events, watch this space. We’re hoping to have a Martial Arts and Mindfulness event in Huddersfield University before the end of the year, and hopefully an event organised by explorations of the Spinozan question ‘what can a body do?’ after that.

In addition, I have been reliably informed that the 5th Annual Meeting of the German Society of Sport Science’s Martial Arts Commission will take place from 6-8 October at the German Sport University in Cologne. At least some of this conference will take place in English this year. I’ll disseminate further information when I have it.

Finally, Ben Judkins has been publishing posts on martial arts studies research methodologies on his blog Kung Fu Tea. The most recent research methods post is written by Daniel Mroz, and it can be found here. I know that Ben is keen to continue this series of posts on research methods, and will be very interested to hear from you if you would like to write a short essay on your own approach.

That’s enough from me for now. As usual, I’ll be posting announcements on related subjects at these venues:

Also, don’t forget, you are more than welcome to contact me about the journal (http://martialartsstudies.org/) and the monograph series: http://www.rowmaninternational.com/series/martial-arts-studies

Building upon recent work regarding efficacy and entertainment, and doing research in martial arts studies, I consider the idea of “jiu jitsu is therapy” that emerged during my ongoing performance ethnography of BJJ on Guam. What type of therapy emerges from a martial discipline where symbolic death is inflicted via chokeholds and strangulation upon a willing partner who taps out, thereby avoiding death? This paper reflects upon the convergence of psychotherapy and anthropology towards an interpretation of the practice of Brazilian jiu jitsu.

D. S. Farrer was awarded a PhD in Social Anthropology by the National University of Singapore in 2007. He has taught anthropology, sociology, social psychology, and martial arts since 1992. Before moving to Guam he lectured in universities and colleges in England, Africa, and Singapore. He conducted ethnographic fieldwork for a decade in Malaysia and Singapore, and has also conducted fieldwork in Thailand, London, and Hong Kong. His research specialities include the anthropology of performance, religion, and art, visual anthropology, violence, spiritual healing, and Chinese and Malay martial arts. Dr. Farrer has published an ethnographic book entitled Shadows of the Prophet: Martial Arts and Sufi Mysticism (2009) with Springer, and a volume (co-edited with John Whalen-Bridge) entitled Martial Arts as Embodied Knowledge: Asian Traditions in a Transnational World(2011) with SUNY. In 2011 he won the University of Guam College of Liberal Arts and Social Sciences Research Excellence Award. On Guam he is interested in mixed martial arts and indigenous cultural revival.

‘Some Women are Born Fighters’:

This presentation draws on poststructuralist understandings of identity to explore how female Finnish judokas make sense of themselves and their sporting experiences. Based on nine semi-structured interviews that were constructed during ethnographic fieldwork in Finland, we explore how female Finnish judokas negotiate their identities by drawing on the discursive resources that are available to them. A Foucauldian approach to discourse analysis revealed that dominant beliefs about human biology shaped the identity negotiation of the participants, who constructed fighting as an inner male quality. Trying to make sense of their experiences in judo, they all constructed a fighter’s identity, differentiating themselves from ‘ordinary’ women, who were constructed as biologically incapable for competitive judo. This study reveals that even in the egalitarian culture of Finland, gender hierarchies and patriarchal ideals persist in martial arts, and women athletes internalise and reproduce their subordination.

Martial arts have a tendency to justify their techniques and practices by mythic narratives, as has been discussed before.[i] One of the most persistent forms of such myths is that of the geometrical foundation. It claims that combative movements based on abstract geometrical principals are in line with the physical foundations of the world itself, and thus superior to other combat methods, or even invincible.

The presentation wants to trace this myth back in time, from internet discussion boards of the 21st century, via the writings of Bruce Lee, to the fight books of early modern Europe. The idea of the straight line as the perfect method of attack is the myth’s incarnation to be discussed, for which a clear historic transmission can be shown. The development of the geometrical myth seems to be connected to a learned book culture, and its depiction in medieval fight books is one of the foremost examples for the connection of embodied practice and media representation highlighted by this year’s conference.

Furthermore, it shall be demonstrated that the geometrical myth exists in various shapes in martial arts all over the world. The question will be raised if we are encountering independent parallel developments, or if there are historic connections between these different examples. If the latter is the case, the consequences for our images of regionalized vs. globalized martial arts culture(s), and for the distinction between Eastern and Western martial arts will have to be discussed.

Sixt Wetzler studied religious studies, Scandinavian literature, and medieval history at the universities of Tübingen, Reykjavík, and Freiburg. He is currently finishing his PhD on ‘The Martial Arts of Medieval Iceland: Literary representation and historical form’. Wetzler is a member of the board of spokesmen of the commission Kampfkunst und Kampfsport (Martial Arts and Combat Sports) in the dvs (German Association for Sports Sciences). He works as curator for Deutsches Klingenmuseum (German Blade Museum) in Solingen, with a focus on the European fencing tradition and other blade fighting systems, and is among the highest ranked European practitioners of Pekiti Tirsia Kali, a Filipino martial art.

Sparring is a combative activity undertaken for the purpose of teaching and learning rather than only to defeat an opponent. As such, it can be understood as play, an action that is intrinsically valuable (Suits 1978, Ackerman 1993). Sparring is rooted in a simultaneous desire to win and to continue the interaction, aligning it with games. Moreover, sparring is preparation for organized, possibly institutionalized, and often spectacularized matches, rendering it training for a sport.

This presentation takes these divergent functions of sparring as a starting point, exploring the multiple connotations of competition within the overlapping spheres of game and sport. Central to this inquiry are the differences between competitive pleasure and competitive spectacle. In line with sports sociologists and historians, I argue that sport emphasizes competitive spectacle and hinges on outcome, winning or losing, rather than highlighting the pleasure of competition and how the game is played (Eitzen 2006, Eichberg 2013). I suggest that attention to physical, contestatory, and exploratory interactions between people may offset an over-emphasis on winning. An intentional reclaiming of amateurism, with its attention to experimentation (Ackerman 1999, Lewis 2014), can also play a role as can a reconsideration of the significance of failure.

Janet O’Shea is author of At Home in the World: Bharata Natyam on the Global Stage, co-editor of the Routledge Dance Studies Reader (second edition), and a member of the editorial review board for the Routledge Online Encyclopedia of Modernism. Recipient of a UCLA Transdisciplinary Seed Grant to study the cognitive benefits of hard-style martial arts training, she is currently completing an ethnographic memoir entitled Risk, Failure, Play: What Martial Arts Training Reveals about Proficiency, Competition, and Cooperation. Her essays have been published in three languages and six countries. She is Professor of World Arts and Cultures/Dance at UCLA.

The first research network event of 2015 was our one-day conference at Brighton University, ‘Martial Arts Studies: Gender Issues in Theory and Practice’ on Friday 5th February.

I have written a review of the day here.

Some very interesting reflections on gender issues in martial arts studies, prompted by the Brighton event, and was posted here.

I found these reflections to be both challenging and stimulating, and responded to the critique here.

Another blog post, detailing the conference has also recently been published, here.

The fact that these debates have sprung up within a week of the first network event – I have also been reliably informed that other responses are already being composed – suggests how successful and significant an intervention it was.

Fallon Fox is the first openly transgender athlete in the sport of mixed martial arts (MMA), after transitioning from male to female in 2006. Since publically coming out as transgender in 2013, Fox has received media attention and transphobic verbal abuse, mainly due to perceptions she has an unfair advantage over cisgender female opponents, and therefore should not be fighting in women’s divisions within MMA. Most notably, opposition has come from Ronda Rousey (former UFC women’s bantamweight champion), Dana White (president of the UFC) and Joe Rogan (sports commentator for the UFC). Drawing on interview and questionnaire data from research on LGBT+ inclusion in sport more widely, this presentation will discuss binary models of gender in sport which often create barriers for transgender people. The presentation will also focus on the poor reception many transgender athletes receive in sport (particularly male-to-female transgender athletes), transphobic abuse towards Fallon Fox, and the controversy surrounding her participation in women’s MMA.

Catherine Phipps is a PhD student at the University of Greenwich, London, researching LGBT+ inclusion in university-based sport. Her research interests include women’s involvement and motivations in a range of combat sports, including boxing, MMA and Muay Thai. In 2015 she co-wrote a chapter in the book Global Perspectives on Women in Combat Sports: Women Warriors around the World, edited by Alex Channon and Christopher R. Matthews. As a martial artist, she holds a 4th degree black belt in Taekwondo and currently trains and competes in boxing and Muay Thai.